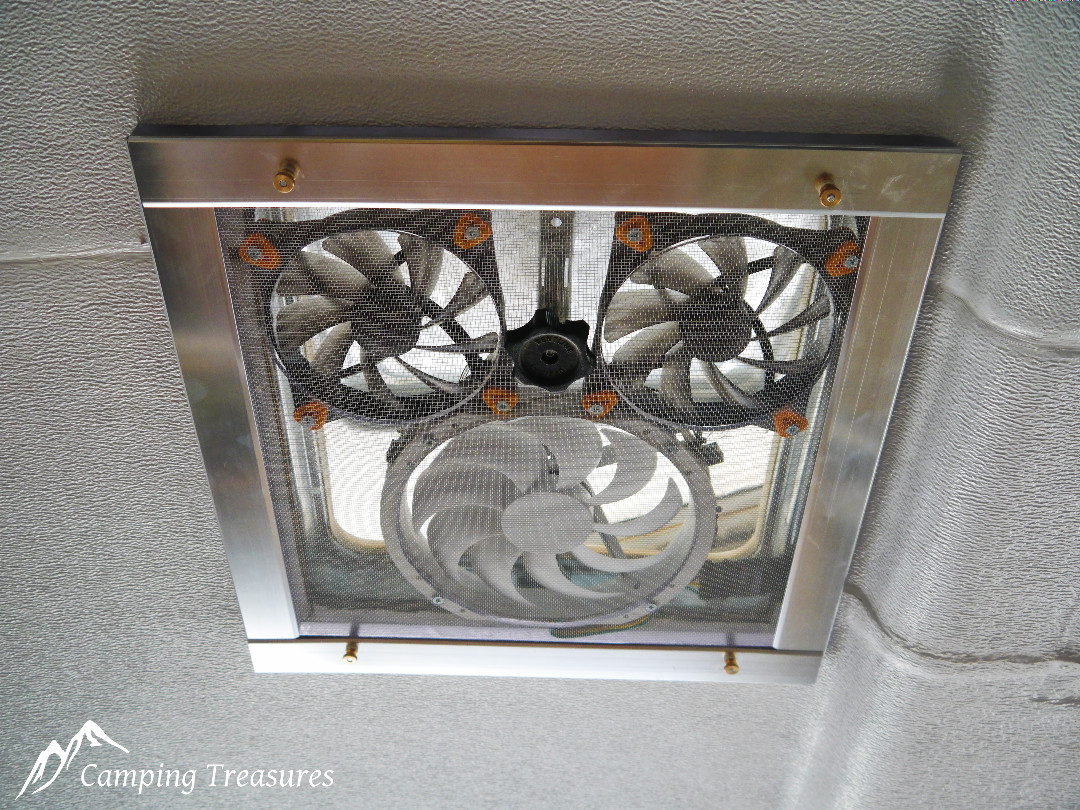 With my desire to constantly make thing better I decided it was time to improve upon my first version of the DIY power roof vent.

The first version worked very well and performed everything I designed it for,  with both fans running on high it ventilated the interior to reduce humidity and condensation (65 cfm full interior air exchange approx 5 minutes), extremely low current draw (0.2 Amps), and be almost silent so it could be left on all night (<20 dB-A).

So what can be done to improve it?  adding a third 230mm (9″) computer fan that really gets the air flowing when needed.  For this modification I relocated the two 140mm fans and wired them together so they could still be used for regular ventilation and silent operation at night.  I added a Bitfenix Spectre 230mm Fan that adds 98 CFM (total airflow increases to over 160 CFM, this fan also draws only 0.2 Amp at  <20 dB-A.  Theoretically this should change the air inside the Boler once every 2 minutes.

You are probably asking yourself “why go to all this work when you can just buy a Fantastic fan”.  well there are actually several reasons:

*I bought my fans through Memory Express, review the fan specification for noise level and current draw.
All the fans I used had noise levels of under 20 dB and max current draw of 0.2A.

First I needed to remove interior bezel and trim (and fans) of the first version.  I am using the metal roof vent which is fastened directly to the roof using butyl tape to seal and 8-32×1/2″ machine screws to secure it.  My review of this roof vent is mixed,  I love the vent, with the outside being metal it is almost indestructible, the negative is the inside bezel and trim are cheaper plastic that had started to crack.  This fan conversion completely replaces all the original trim and plastic so all the negative aspects of the roof vent are gone

The original version ready to be removed 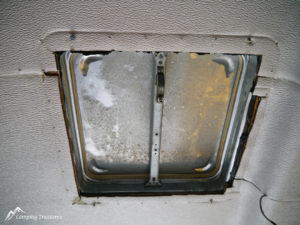 With the interior trim removed a cardboard template is made to determine the best placement of the fans.  You also need to make sure the fans fit under the mechanism for opening the roof vent. I decided to mount the fans on 3/16″ thick piece of clear polycarbonate (Lexan) to let in as much light in as possible. (had some left over from making the windows) but you could easily use ¼” thick plywood.  The measurements from the cardboard template are transferred onto the protective covering of the 3/16″ thick polycarbonate (or the ¼” thick plywood). 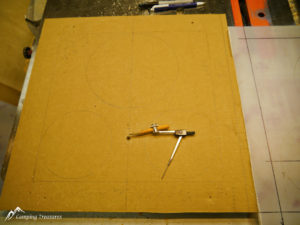 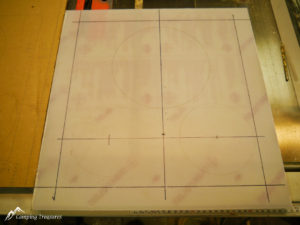 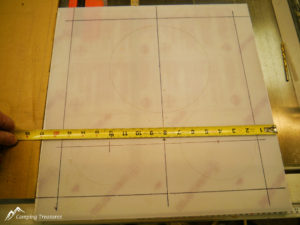 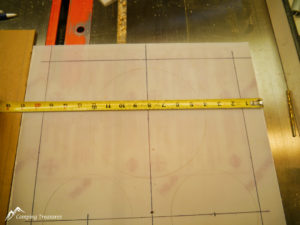 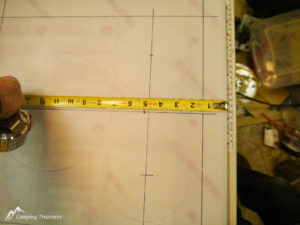 Holes are cut through the polycarbonate (or plywood) with a fine tooth metal blade in a jig saw.  The fans are then mounted using #8-32×1½” flat head machine screws using countersink holes to keep the surface smooth. 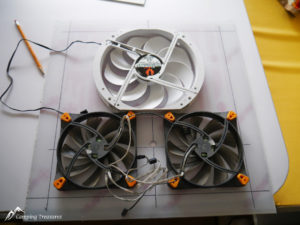 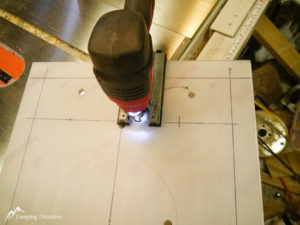 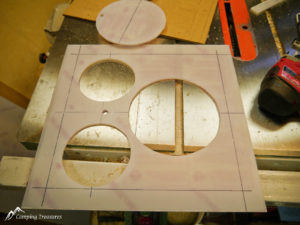 I used ½” thick strips by 1 ½” wide of polycarbonate around the 3 sides to space it down from the ceiling slightly (none was used on the side facing the kitchen wall to allow room for the curved area of the trolley top).  The pieces are “glued” together with Methylene Chloride solvent which essentially melts the polycarbonate and welds itself together.  If using plywood to mount the fans on then use ½” plywood strips and wood glue to attach the strips to the edge of the mounting board. 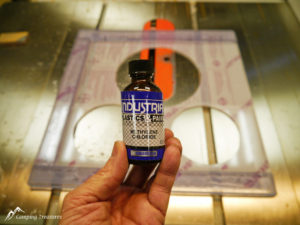 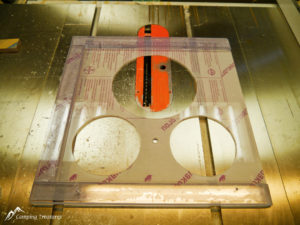 A thin strip of butyl tape is placed around the perimeter to hold the screen in place.  Aluminum screen is cut to fit the surface and held in place with 1½” wide aluminum trim. 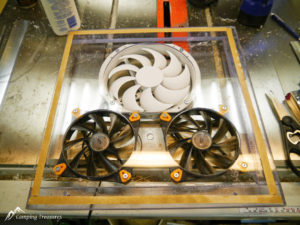 I control the fans through two switches, one switch controls the two smaller fans together and the second switch controls the large fan, this allows for “Low” using just the 2 small fans, “Medium” using just the large fan, and “High” when all 3 fans are running.  Most computer fans use 3 wires, 12VDC+, 12VDC – and a signal wire.  To figure out which wire simply connect the centre wire to a 9VDC to 12VDC battery (for testing you can use a small 9 volt battery), then touch one of the outer wires to the battery negative terminal the centre wire is 12VDC+.  When connected correctly the fan will run.   I used a standard flat 4 wire trailer connector so the fan assembly can be removed easily, the flat wires also slip easily behind the ensolite wall covering so the wires are concealed.  Just carefully peal the ensolite away from the fibreglass at a seam, position the wire behind the ensolite, apply some contact cement to the fibreglass and back of the ensolite and press firmly together.  A little Dap DynoFlex 230 caulking along the seam completes the electrical. 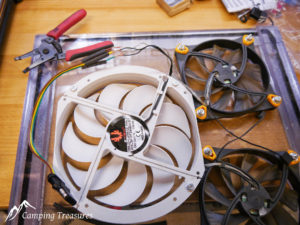 The wires spliced and ready for solder, Note the heat shrink is placed over the wire before joining them. 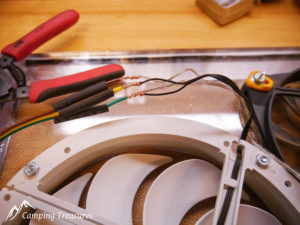 Here all the splices have been soldered 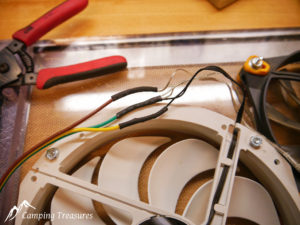 And finally the heat shrink tube is installed 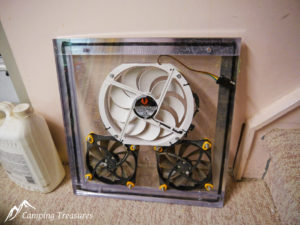 The finished fan with wires tucked away neatly, ready to install 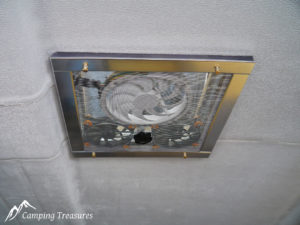 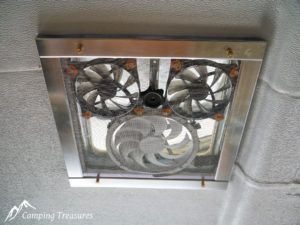